← back to
Blue Hour Music
Get fresh music recommendations delivered to your inbox every Friday.
We've updated our Terms of Use. You can review the changes here. 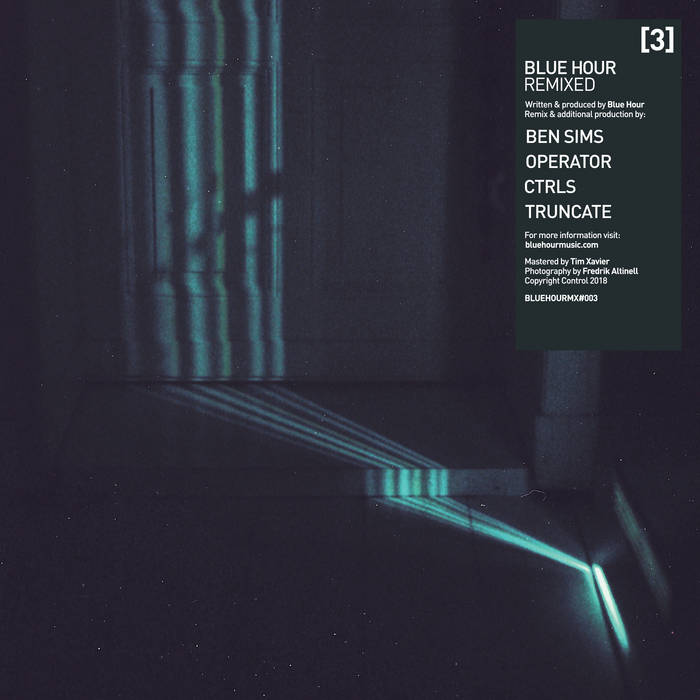 C33JAY Like remixed 02 this is a massive EP! Lot of great represses to get along too. Brilliant!! Favorite track: Introspective III (Operator Remix).

Theory label head Ben Sims looks back to the inaugural Blue Hour 12”, taking on Flow State & transforming the chord driven drum track original into a stunning, peak time roller, while 2015’s Introspective III receives the Operator treatment - opening up the parts and adding considerable width & atmosphere to the more melancholic original. Token-affiliate Ctrls heads up the B1 handing in a sleek, compact reimagining of Unearthed lifted from BLUEHOUR007. Finally Truncate closes out the package with a perfectly tuned loop-Techno redux of Meridian - effortlessly sculpting his well documented effective dance floor focused techno, testament to his reputation.

As Standing’s Blue Hour project continues to gather steam in 2018, RMX003 further cements the imprint as a reliable outlet for some of the very best work in the realm of contemporary, dance-floor Techno and becomes a welcome addition to the British producer’s enviable discography.

Studio project and label founded in 2013 by Luke Standing

Click the link below for all label releases, including other artists

Bandcamp Daily  your guide to the world of Bandcamp

Quelle Chris joins the show to discuss his most recent release, "DEATHFAME"